Home » Money for nothing

Back when we hit our financial low point, our grocery budget was $30 for every two, sometimes 3 weeks, for the two of us. It was during this time that I learned how to cook on a very strict budget and the cookbook Cheap. Fast. Good. was our saving grace. That $30 budget made me really appreciate the day our grocery budget hit $100 per week.

When I first started shopping with $100 each week, I felt rich! The first time I walked into the supermarket with that much money in my wallet, I didn’t know what do to with myself. It was as on odd feeling to be able to walk down the aisles and the perimeter of the store with the ability to buy extras and stop looking wistfully at items like Sabra hummus or Ben and Jerry’s ice cream or pomegranates. Even with that money, I still shopped sales, bought generics as much as possible but it was weird (and almost unsettling) to have that much money to buy food each and every week. I had longed for the day of being able to shop with more than $30 and here it was!

One of the side effects of our increased budget was having more treats in our diets (this happened mostly due to my newfound love of baking pretty much any sweet you can imagine). Another side effect was buying things like cheese and fish (the two reasons I will never be vegan). We were finally able to start building a small stockpile of staples like rice, pasta, canned tomatoes, and beans. More fresh fruits and vegetables found their way into our fridge. I was such a wonderful feeling to expand our menu plans and have a few more choices. We started sailing along on our $100 budget with no problems.

Until recently. I’d been reading a lot in the news lately about the increasing cost of food, the incredible shrinking food packages but it wasn’t something that I had really noticed. I figured the cost increase was mainly on foods that I didn’t eat. But recently, I’ve noticed the huge spike in seasonal produce. I’ve noticed that the jars of peanut butter don’t have the same amount of services or if the servings are the same, the price is much higher. I’ve noticed that the sales aren’t as good as they used to be, or happen as frequently as they used to. Our $100 budget isn’t going nearly as far as it used to. Sometimes, I come home from grocery shopping having spent $80, $90 or even the full $100 and I feel like I’ve spent my money for nothing. Like this weekend’s trip: 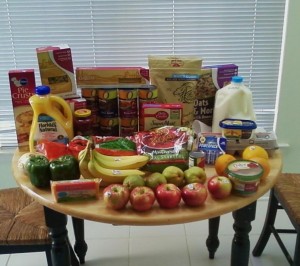 It’s frustrating and aggravating to feel like we’ve come so far in our food budget only to feel like we’re taking a step back. So, to combat the increasing prices, and since coupons make me both dizzy and annoyed, I’ve started implementing the following strategies:

I know that these are common sense strategies, and ones that are advocated by all smart and savvy grocery shoppers. But I’ve had to remind myself that I need to implement these strategies or I need to increase my grocery budget and compromise on other areas. It’s taken too long to actually have a restaurant budget and a “fun” budget; I don’t want to have to sacrifice those in order to afford my weekly groceries.

What changes have you had to make to deal with rising food prices?

Daily Money Shot by Jana is licensed under a Creative Commons Attribution-NonCommercial-NoDerivs 3.0 Unported License.
Permissions beyond the scope of this license may be available at https://dailymoneyshot.net/contact-me/

I am not a financial expert. All information contained on this site is documentation of my dumbass mistakes and is intended to show you what not to do (and to entertain you, I hope). If you need professional financial advice, consult a professional. Additionally… I would be lying if I said I didn’t blog, at least in part, to earn money. To earn said money, this blog may use affiliate programs. This means that when you click on links to various sites and make a purchase, this can result in a commission that is credited to this site (or me). I may also earn money through text link ads, banner ads, sponsored blog posts, product reviews, PPC advertising or any other means that’s legal. For product reviews, all opinions expressed are mine and mine alone. Any product claim, statistic, quote or other representation about a product or service should be verified with the manufacturer, provider or party in question.